A WOMAN RUNNING AFTER HER DREAMS: AN INTERVIEW - SIBILLE ATTAR 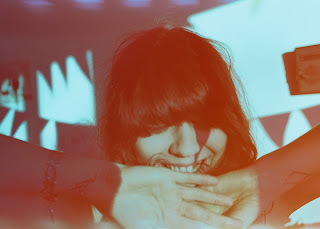 I had an interview with the french-based Swedish singer/song writer Sibille Attar, who is preparing to publish an album called "Sleepyhead" on 20th of February..She has a fascinating and a kind of velvet sound, willing to touch you on every desperate nights!

It looks like that "Sleepyhead" will be the most promising album of this year..Once more, I am thankful for the honest and friendly answers to my questions. (röportajı Türkçe okumak için buraya tıklayın)

So, enjoy ! And don't forget to take a look at her official web site: http://www.sibilleattar.com/

* Can you briefly tell us the story of your first decision to make music? As we know, you’ve contributed the bands such as Speedmarket Avenue, The Tourettes and Little Red Corvette…Can you tell about those years and how did you decide to go on “solo”?

It was quite a natural progress for me, all was already growing on the inside. After mostly singing other peoples songs I started feeling somewhat inadequate. I felt there was much more for me to do in music.
And all of a sudden the moment was there and I just plainly decided to stop thinking too much and just throw myself out there!

• How does it feel to make music in Sweden? Is the weather affecting your music style?  How can you describe your music?

I am a traveling character so Sweden in particular don't affect me more than airports, cars, cities and streets somewhere else.
Good thing thou with the darkness and the cold sometimes if you are havin trouble with focusing, I mean you just have to stay in!!
My music mainly comes from my mind so the environment don't mean much. The crappier it is the more creative u have to get to do what u wanna do! I never had everything served for free! And I'm not sure I wan't that either!

• Can you the tell the process of your debut EP “The Flower’s Bed”? Who wrote the lyrics? And how was the recording process?

"The Flower's Bed" is a 4 song EP I released in august 2012.
I wrote and produced all the songs except one who I cowrote with a producer.
All the lyrics are written by me.
I was working as a waitress the summer of 2010 and when I had made up my mind to do an album I quit my job, sat down in my living room and started to write and work like a maniac.
At first i recorded 10 songs with 2 musicians and a technician and then the summer after I recorded 3 more to have a lot to chose from.
It all took a while and it was one of the craziest things I have ever done, especially because I wanted to do it on my own and had never done anything like it before.

•  Is there a song that you particularly enjoy playing live?

It changes from period to period, right now I particularly enjoy the song To Turn Half Blue! Especially when I have a guest percussionist playin the congas darbouka style!

• Do you play cover songs? If so, which song do you like the cover most?

Not much, I used to do alot of them under the name Little Red Corvette, I did a very different version of Gin House Blues by Nina Simone for a while and a interpretation of a Joan Armatrading song called Baby Woncha come on Home.
I'm working on one right now but I dunno if I think it'll match the genius of the original. I mean, if youre gonna do covers I think it's pointless if you dont make it your own. 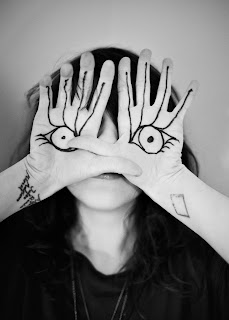 Hm I've been almost all over with many different bands, but with this I've mostly played Sweden, I had 2 shows in NYC last year but that's about it. I can't wait to travel around!!!!!!!!!
I was completely overwhelmed by a Norweigan festival called Traena where you went by boat for 6 hours just straight out in to the icy ocean to arrive at the most magical place ever where night don't even exist!

• “Come Night” is really a good sign of a great upcoming album. And what awaits us in the new albüm “Sleepyhead”? When will you publish it?

The album is released the 20th of february but you can already pre order a copy in my facebook store!!

• How do you feel when you are resembled the singers such as Patti Smith, Bjork and PJ Harvey?

Oh I try to not think too much of that, I mean I don't compare myself to anybody, that would be dangerous I think, but of course it's truly honoring!

•  Who are you listening to on these days? What was the last albüm you bought?

The last album I bought was by and artist called Elias Rahbani and the album is called Mosaic of The orient, it's not good all the way thru but has some amazing gems, listen to "Dance of Maria" for example! These past months I've been feeling kind of nostalgic so I've been going thru the three first Björk albums, (Debut, Post and Homogenic), they are really amazing too. Also I just found a group called The Lijadu Sisters which was great too.

No, all I wanna do is this, more and more! Keep your fingers crossed I will forever!

• What was the most shocking thing that you heard in recent years?

Haha in music you mean? Or in general? Hm. I was pretty shocked when I heard I was nominated for a swedish Grammy award for Newcomer of the year. I didn't even know you could get nominated for an 4 track EP! 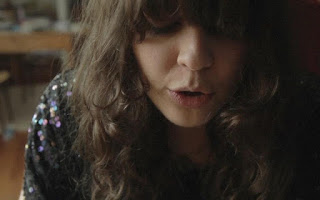 • Do you know anything about Turkey and Turkish music?

Well not really in detail but I have two amazing albums called "Turkish Freakout" 1 and 2 and I actually was very inspired by those albums while making the album.  An artist called Afet Serenay for example, she is great, you can hear how I flirt with her intro in the song "Madem Dagi" in my song "To Turn Half Blue"! Gulcan Opel is cool too. And isn't Selda turkish? I listen alot to an album of hers I think is only called Selda? My favourite is "Yaz Gazeteci Yaz"!!! As you can tell I like old music!

• And lastly, is there anything you want to add? Or to tell to your Turkish listeners?

Hmm, well I hope to come over and play very soon, and if anyone has some great turkish music, let me know!!!!