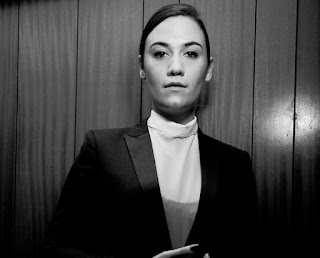 We are thankful to Nadine Shah for her sincere answers..Here is our interview, have fun ! (Röportajı Türkçe okumak için buraya tıklayın! )

• Can you briefly tell us the story of your first decision to make music? In what kind of family you were grown up?

My family aren't particularly musical, although, my father has a beautiful singing voice but just sings songs in his own language of Urdu.
I've always sang but only started making my own compositions a few years ago. The first song i wrote I uploaded to youtube, friends said they liked it and it inspired me to write more.


• Can you the tell the story of your debut album “Love Your Dum and Mad? Who wrote the lyrics? And how was the recording process?

I wrote all of the lyrics on the album. It was very important for me to do so. I had always sang other peoples songs and I wanted to make music of my own and tell my own stories.
I made the album with a producer named Ben Hillier, he has made lots of my favourite British albums..including Blur's Think Tank. I consider this album to be a collaboration between the two of us.


• Do you make covers in your live shows? Is there a song that you particularly enjoy playing live?

I play one song which is a cover. It's called "Cry Me A River"and it is an old Jazz standard..I think it's also my favourite song to play live. I usually play it last, the vocal is quite grand and dramatic..it's really fun to sing.

I've only played in the UK so far, but we have a heap of european dates coming up which i'm really excited about.


• Who are you listening to on these days? What was the last album you bought?

At the moment I have been listening to a band called Foxygen. I listen to all kinds of music from all genres. I frequently revisit older music too, like motown and Jazz classics. The last album I bought was "Push the Sky Away" by Nick Cave and the Bad Seeds, its a wonderful album!!

At the moment I am pretty busy with music. I live in London and it's a great city, there's always so much to do and to see. If i'm not making music I am usually out galavanting around the city in galleries and bars. I'm trying to get back into painting and photography also, as I studied both at University.


• What was the most shocking thing that you heard in recent years?

Ooo i don't know..I have an active interest in world politics so i hear shocking things most days.


• What’s your deepest dream that you want it to come true?

I just want to continue making music and expand as an artist. One day i hope to be a more accomplished pianist and guitarist and make compositions for films. Aside from music I only really want simple things like a family.


• Is there anything that you feel regret by doing that?

I think to regret is the worst feeling possible, I try to focus on positive things rather than dwelling on the past.


• What are your plans for near future? Whats on your agenda?

With the album due for release in July I am now very busy playing live. We have lots of shows lined up for the rest of the year! I'm also starting to work on the making on album number 2.


• What are the first things that come to your mind when you hear these words:


Music: Laura Marling as I am listening to her now as I type.


Family: How funny my dad is.


Marriage: Tick tock..i'm not getting any younger and want to settle down.


Food: My fridge is broken and i need to get it fixed! Haha


Movie: Black Cat White Cat, it is my favourite film!

Book: The Brothers Karamazov, i'm reading it at the moment and it's wonderful.


• Do you know anything about Turkey and Turkish music?

Istanbul is my favourite city in the world!! I go there every year. I have lots of very close friends who live there also. I could talk about Turkey for a long long time as I know a lot about it and i love it dearly. Even where I live in London is a Turkish area so I eat Turkish food at least once a week, i'm a big fan of lamacuns! If I had to live in another city I would choose Istanbul in a second. I like a lot of Turkish music, mainly old traditional songs..not so much Tarkan! haha


• And lastly, is there anything you want to add? Or to tell to your Turkish listeners?

Merhaba! I promise to come and play at Babylon soon, it's one of my favourite music venues!